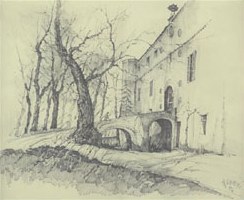 The oldest document in which Valgorrera Tower is named dates back to 1190 when the lords Stuerda ceded it to Pelletta, that with Malabaila governed the fief until XIV century. They were great and noble families of merchants and bankers from Asti, that have come with their loan banks in Lucerne, Zurich and even in Brussels.

From '400 to '700 major lineages of the Piedmontese nobility - the Provana, the Roero Trotti, the Parella - alternated in the property until, in 1783, the castle and 223 days of ground appear to belong to the Cavour who worked profound changes in setting and furnishing of the residential area.

On 26 July 1818 the Marquis Giuseppe Michele Benso di Cavour, Camillo's father who was then a little boy of eight years, sold the property to Gioachino Rolle who took over shortly after the brothers Nigra, cousins ​​of Constantine the famous foreign minister of the Savoy that worked so much at the court of Napoleon III to produce the the desired political effects with the Countess of Castiglione.

They were the Nigra to restore the octagonal tower that still gives the building an elegant aristocratic mansion that aspect, contrasted with intriguing harmony the facade of the massive medieval fortress.

In the last century Torre Valgorrera changed hands a number of middle-class families and one of them still has it. 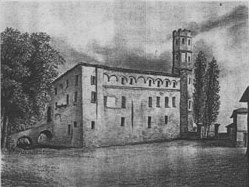 The Tower has been portrayed by Clement Rovere, a royal official who traveled from 1827 to 1856 Piedmont, Savoy and Liguria to perform, on the orders of the king, views of the most significant historic homes. Its tables are now kept in the Palazzo Carignano in Turin.

The gentle severity of architectural lines, the harmonious contrast between the ocher bricks and the green of the fields, the calmness of the atmosphere lively Torre Valgorrera make a great place to inspire the creativity of the artists.